Herbal Medicine and Vaginal Candidiasis in Iran: A Review

Candidiasis is the second most common vaginal infection. Given the frequent recurrence of the disease, many women tend to use herbal remedies. Thus, the present study aimed to review the association between vaginal candidiasis and herbal medicines in Iran. In this review, we retrieved articles published from 2001 to 2016. Then, the results were expressed both quantitatively and qualitatively. In this study, nine articles were reviewed, which had investigated thyme, garlic, garlic-thyme, olive oil, propolis, myrtus, Nigella sativa (black cumin), and Bunium perscicum boiss (black zira). Subsequently, each of these plants was thoroughly dealt with. The studies on black cumin, garlic, and thyme reported positive effects for these herbs, and they were widely produced for therapeutic purposes. In addition, myrtus was found to have a salutary impact on vaginal candidiasis.

Vaginal candidiasis accounts for a quarter of the total number of vaginal infections, 85-95% of which are due to Candida albicans. Approximately 75% of women have contracted this disease once in their lifetime, while 50% and 5% of women experience it twice and more than 4 times a year, respectively (1). The prevalence rate of vaginal candidiasis across Iran has been reported to range between 25% and 45% (2); the conventional treatment for this disease is the use of azoles (3). On the other hand, drug resistance in this disease causes its frequent recurrence (4). Therefore, it seems more beneficial to apply products with antifungal effects but fewer complications (5), including medicinal plants that are suitable for treating this disease due to their compatibility with the normal vaginal flora (6).

In traditional medicine, especially complementary medicine, herbal therapy is one of the valuable legacies of Iranian medicine. Iran is one of the three countries with a long history in this regard (7). To the best of our knowledge, no clinical trials have been carried out on the influence of Iranian herbs on vaginal candidiasis. Further, a review of the studies on vaginal candidiasis as scientific evidence regarding the use of medicinal plants in the treatment of this disease can provide promising information as to the application this effective treatment with low side effects for midwives and gynecologists. Accordingly, we attempted to analyze and summarize the existing trials conducted on herbal medicines and vaginal candidiasis in Iran.

In this systematic review, we searched databases, including Iranian Registry of Clinical Trials (IRCT), SID, Magiran, Scopus, PubMed, Google Scholar, and Irandoc for articles published from 2001 to 2016 on medicinal plants with antifungal effects. First, all the relevant studies on the effects of medicinal plants on Candida infection either in vitro or in clinical trials in Iran, whose title or abstract included any of the keywords of “vaginal candidiasis”, “herbal medicine”, and “Iran” were retrieved and included into our initial list. Then, two researchers individually searched and extracted the data.

The inclusion criteria were studies on herbal medicines and vaginal candidiasis, as well as clinical trials. The exclusion criteria consisted of published studies as abstract and Jadad score of less than 3. The first phase of the search rendered 66 articles. In the second phase, the clinical trials examining herbal remedies for vaginal candidiasis were considered and the rest of the studies were excluded. In the final phase, the abstracts and titles of 14 studies were scanned for study location, study time, sampling site, sample size, and mean age of subjects with vagina candidiasis.

The Jadad scale was employed to assess the quality of articles (8). This tool evaluates the studies based on the probability of bias in the randomization or follow up of patients, as well as blindness; the minimum and maximum possible scores in this tool are 0 and 5, respectively. The articles that received a score of 3 or higher were incorporated into the study. Accordingly, three articles were omitted because they were unpublished dissertations and two were posters and we could not access their full texts. Ultimately, nine articles were submitted to the review process (Figure 1), and the 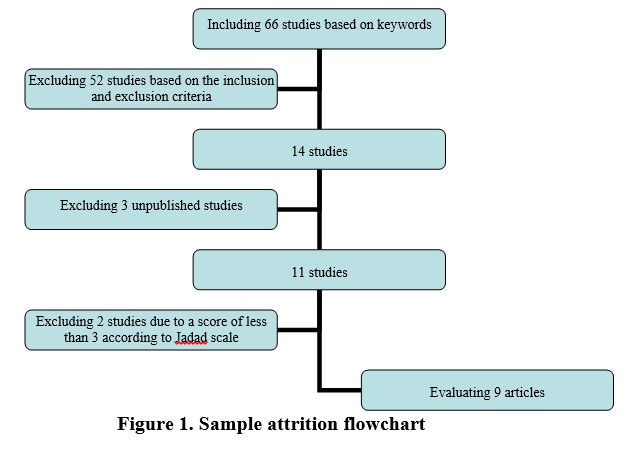 results were reported both quantitatively and qualitatively.

In this study, we reviewed nine articles, which had investigated thyme, garlic, garlic-thyme, olive oil, propolis, myrtus, Nigella sativa (black cumin), and black zira. Subsequently, each of these plants was thoroughly dealt with (Table 1).

Table 1. Profile of trials conducted on herbal medicines and vaginal candidiasis in Iran

*: the minimum score in Jadad scale is 0 and maximum score is 5. Articles with score of 3 or higher were included in the study

In the study of Kordi et al. (2005), entitled as ‘Comparison of the effect of garlic extract vaginal douche and clotrimazole vaginal cream in the treatment of women with vaginal candidiasis’, successful therapy (therapeutic response and culture) in the garlic extract vaginal douche group was less than clotrimazole vaginal cream group (P=0.026). The two groups had no significant differences in terms of therapeutic response based on the symptoms (12).

Bahadoran et al. (2010) investigated the therapeutic effect of vaginal cream containing garlic and thyme compared to clotrimazole cream for the treatment of mycotic vaginitis. They found no differences in therapeutic response between the two groups (13). In the study of Farshbaf-Khalili et al. (2016), the positive effects of garlic and the efficacy of thyme were proven (11). In the study of Foladi et al. (2009), the improvement of clinical symptoms was not significantly different between the thyme and clotrimazole groups (10).

In the studies conducted by Roozbahani et al. (2013) and Janani et al. (2010), myrtus had a positive therapeutic effect (15, 16). Janani et al. (2010) compared the effects of myrtus and clotrimazole vaginal creams. Before the treatment, vaginal itching was the most common clinical symptom. After the treatment, a significant improvement in vaginal itching and reduction in vaginal discharge were observed in the myrtus group compared to the control group (P=0.001) (16). The results of Roozbahani et al. (2013) indicated a significant amelioration in myrtus group in terms of itching and secretion, which are the most common symptoms in vaginal candidiasis (15).

Mehni et al. (2015) showed beneficial therapeutic effects of black zira on vaginal candidiasis. Their results revealed that discharge was the most common clinical finding before the treatment. At the end of the treatment, there was no significant difference in the frequency of symptoms such as discharge, dysuria, and dyspareunia in the two groups (P>0.05), but Chi-square test reflected a significant difference between the two groups of black zira and placebo with respect to improvement of vaginal itching, irritation, and soreness. That study demonstrated that the research units in the black zira group had a greater reduction in these symptoms (P<0.001) (17).

While checking for clinical signs, all the former studies had cultured vaginal discharge from all the research units pre- and post-treatment. After the treatment, all the studies investigated disease improvement in terms of symptoms and negative culture for the presence of Candida. Itching and discharge were the most common disease symptoms among the subjects in these studies.

The above-mentioned articles studied diverse types of plants, and there were only 1-3 articles on each herb. Specifically, one study was found as to other therapeutic effects of black zira and propolis. Studies on black cumin (9, 18), myrtus (15, 16), garlic, and thyme (10-13) were more frequent than other herbs. Studies on black cumin showed favorable therapeutic effects of this plant (9, 18).

Concerning garlic and thyme vaginal creams, not only concurrent effects of these two plants were studied in two studies, but also separate studies had compared the effects of each plant with clotrimazole vaginal cream (10-13).

In the present study, we sought to analyze and summarize the clinical trials on the effects of herbal medicines on vaginal candidiasis in Iran. We concluded that the investigations conducted on this issue were varied in terms of the type of plant studied and only a limited number of articles existed regarding each herb (1-3 studies). We recommended conducting further studies on each plant with larger sample sizes and on the therapeutic effect of each plant separately through either vaginal or oral administration, especially on black zira and propolis as there was a scarcity of studies on them.

Studies on black cumin, garlic, and thyme were indicative of their positive effects; thus, these herbs were widely produced for therapeutic purposes. Two studies were carried out on myrtus that had proper design and acceptable validity, both of which showed that myrtus had a positive impact on vaginal candidiasis. Herbal medicine can help midwives and gynecologists to choose the best method for treating vaginal candidiasis. Moreover, the use of herbal medicines can prevent the side effects of chemical medications. Additionally, taking into account the prevalence of vaginal candidiasis, the treatment of this disease promotes women's health. The results of this study can be of interest to midwives and gynecologists to educate students regarding the importance of herbal medicines as a complimentary method for the treatment of vaginal candidiasis to promote the quality of obstetrics and gynecology health services. Nonetheless, further comprehensive studies are required in this regard.