It is widely accepted that smoking is one of the most serious threats to human health that kills around 5 million people worldwide annually (1). According to statistics, smoking accounts for 90% of lung cancers, 75% of respiratory diseases, 50% of cardiovascular diseases, 30% of deaths between the ages of 30 and 50, and 12% of all mortalities (2). Approximately, 650 million people, who smoke today, will eventually die from smoking-related diseases (2, 3). Moreover, the annual death rate caused by smoking is higher than the sum of deaths caused by drugs, AIDS, suicide, murder, and accidents (4).

If one person begins to smoke during adolescence, s/he can rarely quit this high-risk behavior in adulthood (5). Smoking is the gateway to other high-risk behaviors, such as alcohol consumption and other addictive behaviors (6). One of the most important and widespread concerns of human societies is the prevalence of high-risk behaviors, especially among adolescents and young people. Furthermore, the risky behaviors have been increasing worldwide despite the tobacco prevention activities in the past three decades (7). In this regard, families and schools play important roles since prevention is the only way to cope with this critical and social issue (8).

Other influential factors in managing smoking behavior in adolescents include policies, limited educational resources, and the cultural structure of the family (9). Numerous factors are in this age group, such as parent and friend smoking behaviors, smoking advertising, misconceptions about the harms of smoking, positive attitude toward smoking, and low self-efficacy of saying "No" to smoking.

Self-efficacy is one of the most effective predictors to start smoking (10), and it is considered as an important aspect of self-control (11), and people with this trait believe that they will be successful in their works. Self-efficacy, the core concept of many models and theories of changing behavior, means that a person believes in his or her capabilities to perform a particular behavior for a specific outcome (12). Specific or situational self-efficacy is called persistence to perform a specific task in progress (13). Smoking abstinence self-efficacy refers to one's confidence in his ability to avoid smoking under stressful and difficult situations, which is among the early predictors in abstinence and cessation of drug and smoking (14).

Studies have shown that adolescents with low smoking abstinence self-efficacy smoke in stressful situations as well as in situations when they are with friends and peers (15). Gender, along with self-efficacy, has been mentioned to be effective in starting and quitting smoking (16, 17). Female adolescents are less likely to smoke, and they consider smoking to be more harmful to health, compared to male adolescents. In addition, they have more smoking abstinence self-efficacy than males; however, this self-efficacy compared to boys is decreased substantially considering the influence of smoker peers (18).

An operational definition of the "smoking abstinence self-efficacy in adolescents" construct was presented based on the literature review. Items of similar tools and items based on the literature review were placed in the item pool. In the first stage, 81 items were included in the pool, and they were examined by the research team in several stages, and the duplicate, unrelated, and inappropriate items were deleted or modified. The majority of the items in the same tools had a high semantic overlapping; therefore, they were deleted or merged. Eventually, 30 items entered the psychometric properties quantitative evaluation of the tool.

To investigate the face validity of the questionnaire, 20 high school female students of 10th grade were asked to express their comments on the importance of each question in measuring the construct of "smoking abstinence self-efficacy in female adolescents". The items were scored based on a 5-point Likert scale from quite important (5), to somewhat important (4), moderately important (3), slightly important (2), and not at all important (1).

Following that, the point of the effect of each item was calculated based on the impact formula of the items, and therefore, the items which were equal to 1.5 or higher were considered appropriate. The simplicity, comprehensibility, and appropriateness of the items for measuring smoking abstinence self-efficacy in adolescents were questioned qualitatively. Moreover, content validity was investigated by qualitative and quantitative methods. In the next stage, a primary version of the questionnaire was given to seven faculty members of the Nursing and Midwifery Faculty at Mashhad University of Medical Sciences, Mashhad, Iran, who had a doctoral degree in nursing. They were asked to comment on the simplicity, clarity of using appropriate words, grammar, and place of the items in the tool. Content validity ratio (CVR), content validity index (CVI), and adjusted kappa coefficient (k*) were used to evaluate the quantitative content validity. The items with CVR less than the acceptable value (0.99) were excluded from the study (23). The appropriate CVI value for each item (I-CVI) was considered more than 0.78. Additionally, the adjusted kappa statistics above 0.74, and between 0.60 and 0.74 were considered excellent and good, respectively. The mean scores of the content validity index of all remaining items were calculated as the content validity index of the scale (S-CVI/Ave) (24).

The five-step guide of Williams et al. (2010) was used for exploratory factor analysis to investigate the construct validity (25). These steps include investigating the appropriateness of the data for factor analysis, specifying the analysis method for the initial extraction of factors, selecting criteria for extracting factors, selecting the rotation method, and interpreting and naming the factors.Samplingadequacy was investigated using the Kaiser-Meyer-Olkin(KMO) index and items factor capability with Bartlett's test of sphericity (26, 27). The sample size at this stage was estimated at 300 people per item according to the ratio of 10 participants (28, 29).

Since there was a probability of not responding to the questionnaire, and the response rate was less than 100% in survey studies, the questionnaire was given to 375 people (considering response rate=75%); Finally 351 participants completed the questionnaire. According to the recommendations by Thompson and Daniel (1996), several appropriate methods were used for the extraction of factors. Kaiser Criterion, scree plot, and cumulative variance percentage methods explained by extracted factors were used in this study. The equity of more than one, placement of the factors outside the horizontal line formed from screes (factors above the point where the slope of the line changes severely), and explanation of at least 50% of the variance of the concept were judged by the extracted factors (27, 30).

In this study, univariate normality of the data was examined using skewness and kurtosis. The Promax rotation was employed due to the utilization of the maximum likelihood extraction method and the high correlation among the extracted factors (i.e., >0.3) (31). A cut-off point of 0.5 was considered for the factor loading, as well as the items that had cross loading and a factor loading less than 0.5 were eliminated from this study (32). The reliability of the tool was investigated by the internal consistency method, and Cronbach's alpha coefficient method was used to investigate the internal consistency of the extracted tools and factors (33).

In total, 16-year-old female students of 10th-grade high school (n=351) completed the smoking abstinence self-efficacy scale. Out of 30 items that were presented to a group of experts and female students to assess the face and content validity, 6 items were removed due to the presence of lower scores than the acceptable values ​​in terms of CVR, I-CVI, and adjusted kappa coefficient. Therefore, the remaining 24 items entered the construct validity phase. The CVR and I-CVI ranges of the items were from 0.86 to 1, and 0.68 to 1, respectively. The scale content validity (S-CVI) was estimated at 0.99. Moreover, the amount of KMO in this study was determined at 0.901 indicating the adequacy of sampling. The result of Bartlett's test of sphericity in this study was significant (P<0.000) showing the suitability for factor analysis. Regarding the normal distribution of data, skewness values ​​between +2 and -2 and kurtosis between +7 and -7 showed that the data were normally distributed (34). According to the recommendations by Thompson and Daniel (1996) regarding a simultaneous utilization of a multi-method approach, three factors that had eigenvalues more than one were placed in the scree plot out of the horizontal line formed from the screes (Figure 1), and 60% of the construct variance was totally extracted.

After the psychometric evaluation of the tool, the final version of the smoking abstinence self-efficacy questionnaire was developed with 16 items (Table 1). In total, eight items were eliminated due to the load factor less than 0.5 or cross-loading on more than one factor. The results obtained from the investigation of the internal consistency of the whole scale and its factors showed good internal consistency. Moreover, the internal consistency of the questionnaire was estimated at 0.94 using Cronbach's alpha method. In addition, the Cronbach's alpha coefficients were 0.90, 0.92, and 0.88 for dimensions of high-risk, social, and emotional situations, respectively. 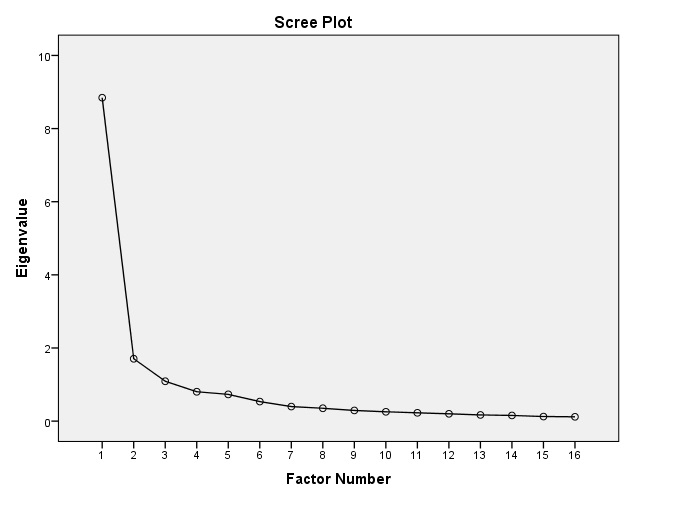 Figure 1. Scree plot for the EFA

Since there have been no tools measuring smoking abstinence self-efficacy in female adolescents in Iran, this study attempted to design a tool for the first time to measure smoking abstinence self-efficacy in Iranian female adolescents. Quantitative and qualitative face and content validity, and construct validity (exploratory factor analysis) were used to investigate the validity of the tool. Moreover, the reliability of the tool was evaluated using the internal consistency method (Cronbach's alpha). The results of this study confirmed the validity and reliability of the smoking abstinence self-efficacy tool in Iranian adolescents. Given that the S-CVI greater than 0.9 is acceptable, the S-CVI of the tool was obtained at 0.99. Therefore, the tool obtained good validity.

Furthermore, the internal consistency of the tool was estimated at 0.94 using Cronbach's alpha coefficient. Since values ​​above 0.7 are acceptable for a new tool, the appropriate reliability of the tool was confirmed in this study. The developed questionnaire in this study investigates smoking abstinence self-efficacy in three dimensions of emotional situations (3 items), social situations (5 items), and high-risk situations (8 items). The items were scored using a 5-point Likert scale from very likely (1), likely (2), moderately likely (3), somewhat likely (4), to not likely at all (5). Higher scores indicate more smoking abstinence self-efficacy.

In the scale developed by Lawrence, social opportunities, emotional factors, and the friends' impact are extracted (21). The first two dimensions are fully consistent with the social and emotional situations of the present study and the influence of friends in the present study is regarded as a high-risk factor. Ebrahimi et al. conducted a survey study using confirmatory factor analysis. According to the results, two categories of internal factors (i.e., positive feelings, negative feelings, relaxation, and emotions) and external factors (i.e., interpersonal, professional, location, and restrictive positions) were approved in the aforementioned study (20).

In a study carried out by Karimy et al., only one of the dimensions of the questionnaire examined self-efficacy and predictive behaviors of tobacco use (19). The items of this dimension are consistent with the social situations of the present study. The use of other methods of investigating the validity of the tool, such as convergent and divergent validity as well as test-retest reliability, could lead to the development of a more valid tool; however, this study did not employ other methods, which can be regarded as one of its weaknesses.

This study is extracted from a Master thesis in Community Health Nursing which funded by the Deputy of Research and submitted to Mashhad University of Medical Sciences, Mashhad, Iran (96/163). The authors appreciate and thank all the officials and directors of education in Mashhad, as well as teachers and students who cooperated with conducting this study. The authors also express their gratitude to the panel of experts who assisted in the validation of the tool.

There are no conflicts of interest regarding the publication of this study.