Background: Menopause age is a determinant of health status and the risks for future diseases.
Aim: The current study aimed to determine the average age of menopause among Iranian women in a meta-analysis.
Method: This systematic review and meta-analysis was performed in August 2017. The articles were searched in Persian databases, including Iran Medex, SID, and Magiran, as well as international databases, including Scopus, PubMed, and Web of Knowledge, without any time limitation. The search process was accomplished using the following keywords: “Menopause” OR “Menopause age” OR “Age of menopause” OR “Menopause age and Iran”. Begg’s and Egger tests were used to identify publication bias. Data analysis was performed in Stata statistical software (version 14) using random effect model.
Results: The search process resulted in the inclusion of 28 articles with a total of 40,042 subjects published during 1998-2017. The mean age of menopause was evaluated as 48.57 years (CI: 47.96- 49.18). Analysis of subgroups indicated that the mean ages of menopause were evaluated as 47.21 (CI: 46.94-47.48), 48.43 (CI: 47.76-49.10), 47.53 (CI: 47.17-47.88), 47.80 (CI: 47.49-48.11), and 47.83 (CI: 47.34-48.32) in smoking women (based on nine studies), non-smoking women, women with normal body mass index (based on eight studies), overweight women (based on seven studies), and obese women (based on six studies), respectively. The minimum mean age was 47.97 years, which belonged to the north region.
Implications for Practice: The results suggested that the average age of menopause is still within a normal range despite its rise with a normal slope. It seems that the changes in the women’s lifestyle have affected the menopause age. Consequently, special attention should be paid to some factors confounding menopause age among Iranian women to promote their health and reduce the health problems related to menopause.

Menopause is the time in a woman's life when fertility period ceases. This period is considered a critical transition period in a woman’s reproductive life. Age of menopause is a determinant of health status and risk of future diseases in women (1). Natural menopause is defined as the permanent absence of menstrual periods for 12 months without any pathological causes as a result of the absence of ovarian follicular activity (2) .

Biochemical and hormonal changes in this period lead to physical and psychological symptoms and changes in the quality of life in this population (3). Menopause age varies among different female populations (4). A woman’s menopause age is affected by a number of factors, including the age at which the woman’s mother and sister experience menopause (5), gravidity, body mass index (BMI), smoking (3), physical activity, and place of residence (6). A woman’s age at natural menopause is a predictor of postmenopausal diseases and mortality (7).

Age of menopause is an important health indicator. In this regard, each year of increase in menopause age will reduce the total mortality rate by 2%, as well as the mortality due to acute cardiac ischemia (8). Moreover, early menopause will enhance the risk of cardiovascular diseases, osteoporosis, and mental disorders (9). On the other hand, late menopause is associated with a higher risk of breast cancer (10). Iranian population is making transition from a young age structure to an old age one as a consequence of medical advances, higher life expectancies, and lower birth rates.

According to the World Health Organization (WHO), the Iranian population aged 60+ will increase to 33% over the coming 35 years (i.e., by 2050) (11). Accordingly, there would be a rise in the number of postmenopausal women in Iran over the coming years. The evaluation of menopause age plays a significant role in the management of postmenopausal complications through national health policies. With this background in mind, the present study was conducted to evaluate the average age of menopause among Iranian women through a meta-analysis.

The present systematic review and meta-analysis was conducted to identify the average age of menopause among Iranian women in August 2017. This study was performed based on preferred reporting items for systematic reviews and meta-analyses checklist. For the purpose of the study, the articles related to the subject of interest were searched in several Persian databases, including Iran Medex, SID, and Magiran, as well as a number of international databases, including Scopus, PubMed, and Web of Knowledge. The search process was performed using the following keywords: “Menopause” OR “Menopause age” OR “Age at menopause” OR “Menopause age and Iran”.

The recorded data included the mean and standard deviation of age at menopause, author’s name, year of publication, sample size, and demographic characteristics of the study participants. For the purpose of searching for the articles, first, a list of titles and a summary of all articles available at the databases were searched by two independent researchers. After the removal of the duplicate or irrelevant articles, the full-text versions of the articles were investigated by the two researchers. In case of disagreement between the two researchers, a third person re-examined the article to achieve a consensus.

A critical appraisal tool was used to assess the quality of the included cross-sectional studies. This valid tool facilitated the assessment of the introduction, methods, results, and discussion, and 2 other questions. This tool entailed 20 questions, each of which was answered through selecting “Yes”, “No”, or “Don’t Know”. This valid tool is applied for review studies (12). In this scale, the total score ranges between 0 and 20; in this regard, the studies with a score of 16 or more were included in the review process. 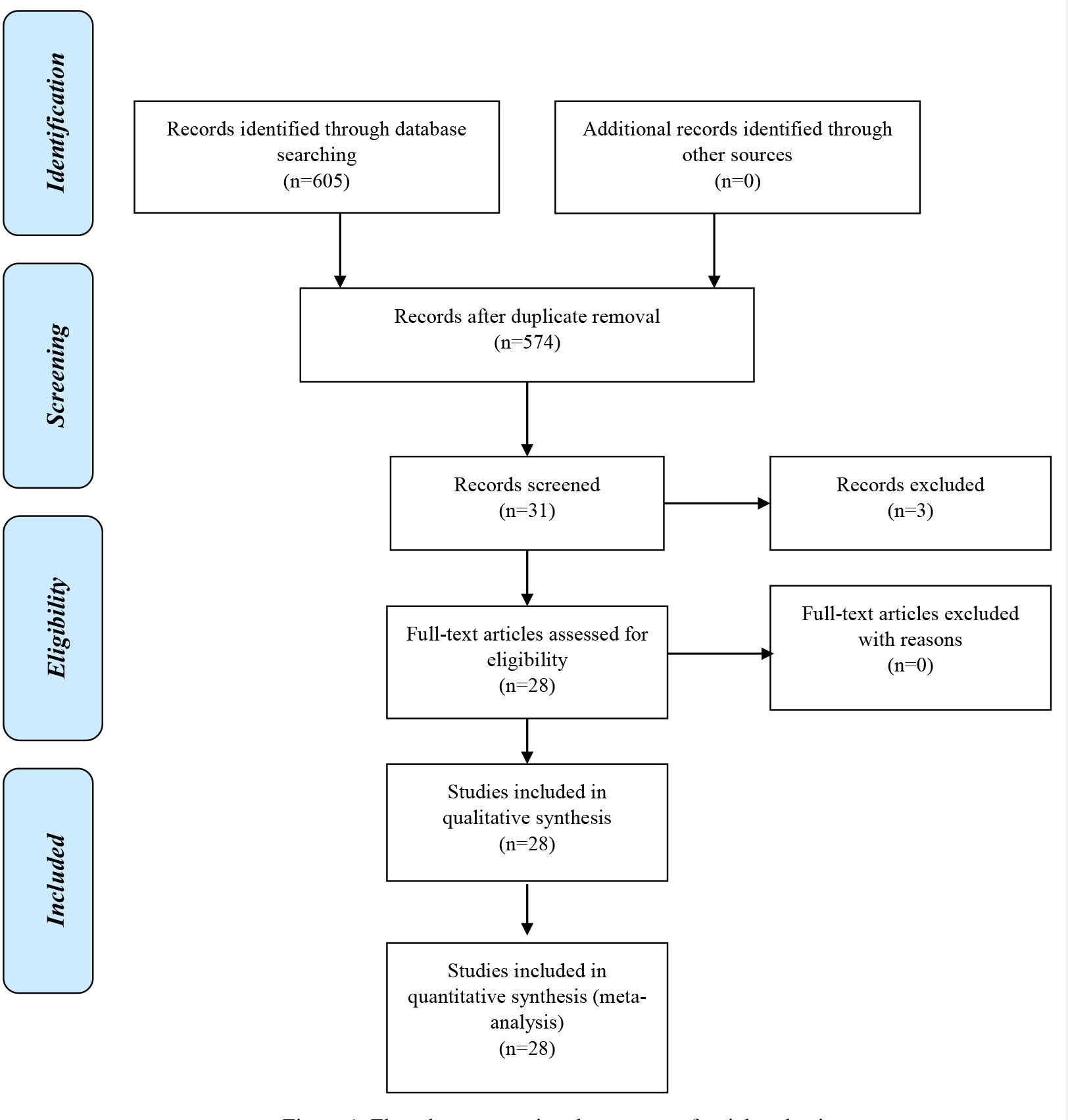 (version 14) were used for data analysis regarding the study heterogeneity.

The number of the participants of the reviewed studies corresponded to a total of 40,042 women. In order to estimate age of menopause in Iran, 28 articles published during 1998-2017 were analyzed (Table 1). The results of the Chi-square test indicated that heterogeneity was significant for all subgroups; furthermore, I2 index showed that heterogeneity for all subgroups was above 90%.

Table 1. Information of the included studies 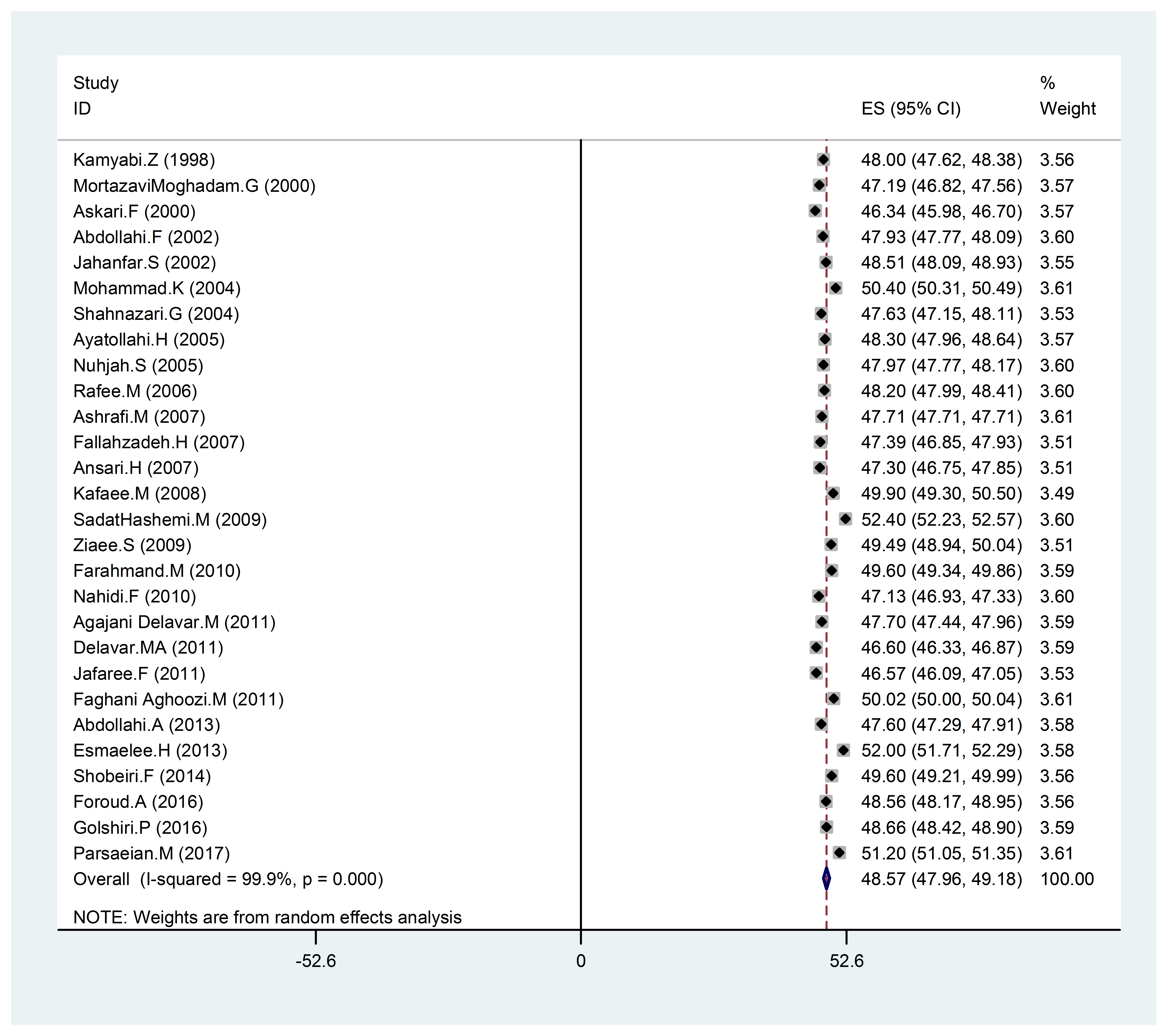 Based on the analysis of 28 studies, the average age of menopause in Iran was estimated as 48.57 (CI: 47.96-49.18) years. In a systematic review and meta-analysis study performed in 2014, the average age of menopause in six countries was obtained as 48.3 (CI: 48.78-49.2) years (13). It seems that menopause-related changes may arise from different biological factors (e.g., genetic and nutritional factors or history of reproduction) across different geographical locations. These variations can be also affected by such factors as lifestyle, occupation, smoking, place of residence, and socioeconomic status (3, 14).

In our study, the average ages of menopause in eight studies were estimated as 47.21 (CI: 46.94-47.48) and 48.43 (CI: 47.76-49.10) years in smoking and non-smoking women, respectively. Younger age of menopause will increase several types of physical and psychological complications. Early menopause is associated with some 2% of annual mortality and increased risk of cardiovascular disease, diabetes, and osteoporosis (15).

Based on the evidence, long-term smoking will reduce the age of menopause. In the same vein, the duration and severity of smoking (i.e., the number of cigarettes used per day) affect the menopause age (16). According to a number of studies, the detrimental effect of cigarette on the number of children and female reproductive system paves the way for the incidence of early menopause (17).

There are different assumptions on the relationship of the biological effects of smoking with early menopause. In this regard, it has been stated that the smoking women have a more significant drop in estradiol levels in the middle of their menstrual cycle and luteal phase as compared to the non-smoking ones. Experimental models suggest that nicotine causes follicle loss in ovaries and blocks aromatase enzyme that is responsible for the conversion of androgen to estrogen (18).

In a study carried out by Tao et al. (2015), the hazard ratios of early menopause in overweight and obese women were reported as 0.92 and 0.88, respectively, which were higher than the ratio obtained for underweight women (19). Adipose tissues in obese people increase the production of estrogen as a result of the conversion of androgen to estrogen in the peripheral adipose tissue, thereby leading to late menopause (20).

It seems that the high prevalence of obesity in Iran can result in late menopause in the near future. Although menopause age is currently within a normal range with an increasing slope, it may exceed the normal range if this trend continues. According to the literature, although late menopause can reduce the hazard ratio (0.98) of cardiovascular diseases per year, it increases the risk of gynecological cancers (8).

The results of the present study suggested that in Iran, the average age at menopause is increasing with a gentle slope per year. Although this relationship is not statistically significant, it is very critical regarding the great impact of menopause on women’s health. In line with our study, in a European study, it was reported that menopause age differs across Europe and shifts towards an older age.

The strength of our study is the analysis of menopause age in terms of different time courses and geographical regions of Iran, which showed that the age of menopause varies across different times and regions. Additionally, the results of this study are very powerful given its cohort design. One of the limitations of this study is the use of medical records for data collection. Furthermore, none of the included studies reported the effect of chemical exposure on menopause age; therefore, this issue remained unaddressed, which is another limitation of this research.

Furthermore, all included studies were cross-sectional. The accuracy of reporting menopause age can be different in each study, which may have affected our results. In addition, many confounding factors, such as race, reproductive factors, and lifestyle, should be adjusted when estimating the menopause age. The physical well-being and life satisfaction among menopausal women should be also taken into account (21). With regard to the transition of Iranian life style from traditional to modern (22), the health threatening factors during menopausal period should be given more attention.

As the results of the current study indicated, the average age of menopause is still within a normal range in Iran despite its rise with a normal slope. It seems that the change in women’s lifestyle have affected the menopause age. Some remediable factors that confound menopause age among Iranian women need special attention to promote women’s health. Consequently, health providers should plan for monitoring the health of premenopausal and menopausal women.

This study is related to the project NO:1396/46456 From Student Research Committee, Shahid Beheshti University of Medical Sciences, Tehran, Iran. We also appreciate the “Student Research Committee” and “Research & Technology Chancellor” in Shahid Beheshti University of Medical Sciences for their financial support of this study.

The authors declare no conflicts of interest.